If you haven’t yet read All the Stars in the Sky, you might find this post to be spoiler-y, so close your eyes! 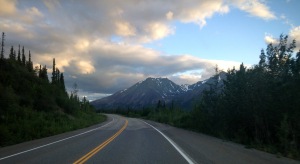 On research, and some thank yous.

One reason All the Stars in the Sky felt like it took longer to write (besides its length) is that I did a ton of research. I spent a hundred, if not hundreds, of hours on Google Maps. I virtually drove through much of Canada and Alaska, so much so that when I finally went to Alaska this past summer and my husband and I drove through Wasilla, I thought to myself, “I’ve been here before.” I knew where I was, knew what was ahead, and knew that I had probably spent far too long on Google Maps than was healthy.

But I wanted ATSITS to be realistic. I wanted to be in that RV with our group. And besides the obstacles I created—zombies and the like—I’d say 90% or more of the places they stopped were real. The houses in which they stayed, the towns, the stores, the bridges and rivers, the lake and the roads are all there, if you ever wanted to find them. And, like James and Mark, I also have a well-thumbed back roads atlas of Canada.

Part of the reason research is so much fun is that it brings up ideas you never would’ve considered. In regard to the conveniently placed fireworks stands, those are there. And I never would have known it had I not driven the route down to Anchorage myself and thought, “Holy crap, I could so use those fireworks!”

I figured out and kept a running list of mileage, vehicle MPGs, and amount of gas found. I kept lists of food. I asked questions of random internet people and managed to persuade the amazingly kind Director of Distribution of Bi-Mart to allow me into his distribution center to get the lay of the land (Thanks, John!). I forced Canadians to tell me about their cities (Thanks, Jessica and Lindsay!) and made a dentist answer a few questions about the amount of medical training dentists receive (Thanks, Melissa!). I spent two hours researching boat lifts for four paragraphs of writing, I researched the mechanisms of loading doors (also known as rolling doors—who knew?) and thermal cutting (which was not a viable option for our gang), among many other random things. Hey, I’m not complaining. It’s a lot of fun.

I tried my hardest to cover every base and to at least to pretend I knew what I was talking about. But if you find any errors, they’re mine and mine alone. Don’t blame my lovely, helpful readers or the Google Corporation for my mistakes.

I wanted you to feel as if you were traveling along the road with Cassie and the others, to see what they saw, to get a glimpse of what it might actually be like to journey through a wasteland of a world. I wanted it to feel as realistic as possible—you know, for zombies. I sure hope I succeeded.

25 thoughts on “On Research”